A friend of mine recently recommended the Young Explorer's Adventure Guides and I immediately fell in love with them. Not only are these stories chock full of excitement and adventure but each character is unique. Whether an alien, robot or human, this collection of short stories will take the reader to new places and inspire us all to remember that we each have our own story to tell. I asked the minds behind the Guides, Corie and Sean Weaver, to tell us more about them.


What inspired you to create a science fiction adventure anthology for middle grade readers?

Corie's friend, who happens to have the most amazing daughter anyone would ever hope to meet, was looking for sci fi books for younger readers with a strong female protagonist who's not out to be rescued or looking for romance. There was a depressing lack of titles that fit those two simple criteria. Corie, being the walking idea factory she is, woke up one morning and said, "We should start a publishing company." Not having had my first cup of coffee, I said, "Of course. That makes all the sense in the world." And so Dreaming Robot Press was born. The next morning, Corie woke up and said, "We should publish an anthology for middle grade readers." The previous day's coffee had long since worn off, and I hadn't gotten around to refilling for that day, so I said, "That, too, makes all the sense in the world. After all, we now own a publishing company." After publishing the first Young Explorer's Adventure Guide, we questioned the sanity of trying to publish an annual anthology
and wondered if there was going to be a second collection.

Then the emails and letters started coming in from kids and their parents telling us how much they enjoyed the Guide. I'll be honest, both of us were in tears reading the notes from the kids. We decided there was no question, we'll continue to publish the Explorer's Guide until we're old and frail.

How many books are there in the Young Explorer's Adventure Guides series?

We're publishing Volume Five in December. It's the best one yet. Until Volume Six, of course.

Are there specific things you look for in a story when putting the Guides together?

It's a cliche, but we're looking for a great story. We want to have fun reading it. We want to be surprised. We really enjoy it when authors read our submission guidelines on our website.

How are you getting the word out about the Adventure Guides?

Each year, we run a Kickstarter campaign to launch the upcoming Explorer's Guide (look for it sometime late summer). Corie also appears on several con panels to talk about the importance of diversity and representation in science fiction and we run ads in various media. We're always so grateful to hear about the word getting out organically; readers enjoying the collection and telling their friends.


Can you tell us about yourself? 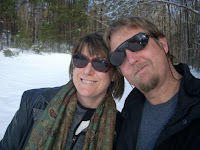 Corie and I (Sean) both have backgrounds in publishing; Corie worked at a small publisher in Santa Fe, and I was in magazines and newspapers for a number of years in Colorado. We've been married for eight years and have five furry kids: two dogs and three cats. We live in a little town in northern New Mexico, Las Vegas, that is quite a bit different than the other more famous Las Vegas. When we're not wearing our secret-identity publisher's capes at night, we both work at a university to keep our real identities secret.

When you were growing up, were there specific authors who influenced you?


One of Corie's favorite writers was Nancy Cress, so we're delighted she has been in most of the anthologies and has been a strong believer in the Young Explorer's Guide mission. Corie says her list of authors is too long and would never fit in a standard interview (she is very seldom seen without a book in hand). My tastes were quite a bit different from Corie's. I read Steinbeck's The Grapes of Wrath in middle school, which started a love of American modernist literature (I didn't use the term American modernist literature in middle school - I was already picked on enough).


Were there specific stories or characters that you related to? 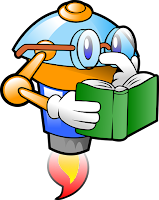 I'm going to answer in a way a little different than the intent of your question. Corie and I feel strongly that all readers - girls, boys - from different cultures and backgrounds, of different abilities, carbon or silicone based, should be able to easily find stories where they can identify with the characters. More importantly, readers should be able to identify with characters who are not like them. Studies show people who read or attend the theater have a higher level of empathy than those who don't. We need girls and young people from underrepresented populations to believe they are an important part of our future, and we need young readers who are not part of these groups to believe everyone - everyone - should be able to dream, aspire and achieve.

Dreaming Robot Press is a cool name! Is there a story behind that?


As a matter of fact, there is! I'll let Corie tell this story: When we started the publishing company, NASA lost contact with the Mars rover Pathfinder. I love the Mars rovers and get completely absorbed by them (Sean's note: she really, really does). So I told myself, “It’s just taking a nap.” In my head, the rovers have had engineers around them, talking to them and putting their thoughts and love into this creature, and then they go off on their missions, break down, and take long naps. What do rovers dream? If they were children, what would they want to read about? It’s not really a Philip K. Dick reference, but that was certainly in the back of our heads. And then we got the logo illustration, and it was exactly what we’d imagined.

Dreaming Robot Press also publishes middle grade and young adult science fiction and fantasy novels. Can you tell us about them?

We have three books out right now, The Seventh Crow, where a mysterious crow helps fourteen-year-old Rosinda navigate a forgotten world filled with startling revelations, Demon Girl's Song, a young adult tale of Andín dal Rovi, who wants to escape her small town life. Instead of escape, she gets a thousand-year-old demon stuck in her head, and she loses everything – her home, her family and her country, and A Witch's Kitchen, a story of a young witch who can't do magic, but is an amazing cook. When Millie conjures chocolate sauce instead of a transformation potion, her mother gives up and sends her to the Enchanted Forest School, where she’s bullied by goblins, snubbed by an elf, and has her hat stolen. We have two more coming out this year, Twain's Treasure, where Alex April and his friend Bones are haunted into an adventure by the ghost of Mark Twain, and A Pixie's Promise, a sequel to A Witch's Kitchen, where Petunia, lost at home among her bazillion brothers, sisters, and cousins, must figure out how to change the formula to save the Enchanted Forest while living up to all the promises she’s made.

The wonderful thing about stories is they are so ingrained in who we are as humans. Cave paintings from 40,000 years ago told a story. Homer told a story. Shakespeare told stories. Cress tells stories. Each and every one of us tells stories. Every day. The delivery of humanity's stories will continue to evolve through different media, but the core importance of story telling will never change.


Any advice for aspiring writers?

Several years ago, I worked for a short stint as a studio manager for an artist. One day while we were working, I asked him, "What's the key to becoming a successful artist?" He didn't hesitate. "Stick around long enough to where people take you seriously." It was not the answer I expected, but there was a lot of truth to what he said. It's too easy to give up. Anyone who chooses to follow a creative passion puts herself or himself out to the world and is judged, criticized and rejected. Then they give up. DON'T GIVE UP!!!! If you have a passion for something, chase it. Live it. When you're knocked down, stand up and tell the world it hasn't seen the last of you. Note that you're not giving up. Here's some practical advice: 1) keep writing. It's amazing how many people we've met who call themselves writers but haven't put a single paragraph down on paper (or screen). Writing is a craft and must be developed. You're not going to pick up a guitar and be a rock star the same day. Practice. Every day. 2) Turn off the TV. It's nature's perfect time destroyer. 3) Join a crit group. Not just any crit group. Find a crit group that isn't afraid to tell you the truth (diplomatically, of course). Sure the truth hurts sometimes, but it will make you a better writer. Keep in mind your mother, father, relatives, and dogs are contractually obligated to tell you how wonderful you are (and you are wonderful). Find people who will really make you think about your writing. 4) When submitting, read the submission guidelines. Every publisher has them. They want you to read them. It gives you a leg up. And you don't look silly submitting something that has nothing to do with what the publisher wants to see. 5) Editors are your friends. They live to make your story the best it can be. 6) Be professional. It will help you get to that "stick around long enough to where people take you seriously" a lot more quickly.

How can we find your books?

They're on our website at Dreaming Robot Press , on Amazon and can be ordered from any bookstore.

That’s great! Thank you Sean and Corie. And to all life forms, silicone or carbon, or not yet discovered, be sure to check out the the Young Explorer's Adventure Guides!

Posted by Mackenzie Reide at 2:28 PM