BRAVE NEW GIRLS: THE ADVENTURES OF GALS AND GIZMOS

I remember as a kid wanting to sneak aboard NASA’s space shuttle and orbit the earth. Then I longed to travel in Dr. Who’s TARDIS. This curiosity to explore beyond our star system led—in no small part—to an Honours Degree in Mechanical Engineering and a minor in Aerospace.

So you can imagine my delight when I discovered the BRAVE NEW GIRLS anthology series! These collections of sci-fi stories feature brainy young heroines who use their smarts to save the day. Girls who fix robots and construct superhero suits, hack interstellar corporations and build virtual reality platforms. Who experiment with new-fangled devices and tinker with time machines. Who defy expectations and tap into their know-how—in the depths of space, or the bounds of dystopia, or the steampunk-y past, or the not-too-distant future—to solve despicable crimes, talk to extraterrestrials, and take down powerful villains.

I asked the minds behind BRAVE NEW GIRLS, Paige Daniels and Mary Fan to tell us more about them. 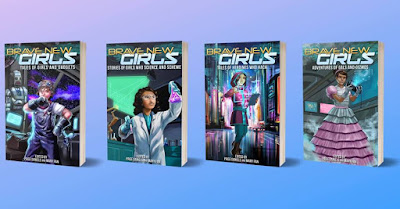 What inspired you to create a science fiction anthology series for middle-grade and young adult readers?

Paige: I'd say the lack of material out there. I think the market is better than I was a kid (a million years ago), but still a lot of the YA heroines are these tough kick-ass girls, but you don't see a lot of girls who are straight up smart and really not ashamed of that.

Mary: Paige and I felt there weren’t a lot of YA stories out there about girls who were both brainy and the heroines of their stories. Too often, the girl who was into tech or science was stuck in a supporting role – the nerdy best friend or something. And since fiction can have a huge impact on how you see the world – including your own place in it – we felt the lack of fictional peers and role models might be influencing real-world girls and whether they chose to pursue STEM. So we wanted to fill that gap.

How do you come up with the cool subtitles? 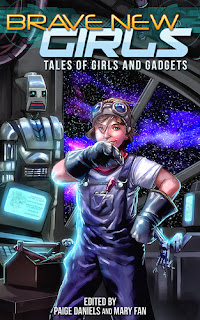 Paige: Uh a lot of brainstorming between me and Mary, that happens at GenCon (aka the Brave New Girls onsite yearly meeting). I think the first couple came fairly easily this last one was a little tougher to come up with.

Mary: Yup, basically a lot of trial and error. Girls & Gadgets (the first one) came to us super easily, and since then, we've been trying to follow the format - something about the girls and then something tech-y. And it has to have alliteration, which is getting harder with each anthology... Hopefully we won't run out of words!

The protagonists are girls with a knack for science, tech, engineering and math. How cool! Tell us about connecting STEM and the stories.

Paige: I think each author has a different process. Personally, I'm not a fan of stories that cram STEM and such down your throat. I like it to be an organic part of the story. Like it's not weird that this girl is interested in STEM or that she's smart. It's just seen as that's they way it should be.

Mary: It’s different with each story, of course, but what we’re looking for in submissions are stories where the main character is into STEM. Sometimes, the whole story ends up revolving around this – they’re using their STEM skills throughout the story. Other times, it’s more incidental – the plot happens, and the STEM skill comes in handy. I think it’s just important that being into STEM is part of who the character is, and that it’s not shoehorned in. Because that’s how I’d like to see it in the real world too. You can be into STEM, and it’s not a big deal. It’s who you are, you’re comfortable with it, and your friends support you.

Each story has a unique illustration. Is there a story behind that? 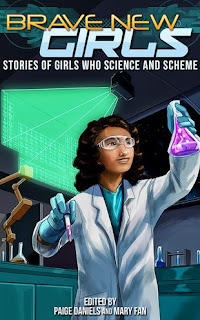 Paige: Mary and I both really love book covers and when were first coming up with this idea i think we were both totally on board with the fact that each story HAD to have its own illustration. Personally, it's one of the aspects of editing these books i look forward to the most. We're the first to see the art. We always ooh and aww at it.

Mary: We really spoiled ourselves with the first anthology. Honestly I think we just wanted illustrations because we thought they’d be cool, and after we exceed our crowdfunding goal, we thought, “Hey, why not?” Of course when we decided to do more anthologies, we couldn’t NOT have illustrations in those too. It’s so much fun seeing what the artists come up with each story! And some authors do their own, which is always fun. I actually did my own for the first anthology just to see if I could.

The proceeds from sales are donated to a scholarship fund with the Society of Women Engineers. Can you tell us more about that? 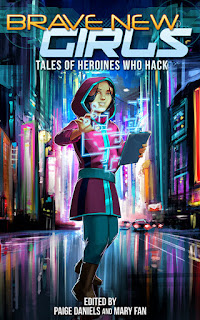 Mary: I’m going to let Paige answer this one!

Paige: When we first thinking of this series of books we wanted to do some sort of outreach / scholarship with it. My day job involves STEM and outreach and engineering. I know all the work that it takes to administer a scholarship yearly and I knew neither of us had the bandwidth to do that. But I am a member of Society of Women Engineers and I knew they had scholarships for girls and they are darn good at being advocates for women in tech so we figured let them do the heavy lifting and we'll donate to them.

When can we get the next installment?

Paige: The ebook is out! Paperback July 2019!
Mary: Yup, we’re targeting July 2019 release! Just around the corner in time for summer reading! We *need* to have paperbacks on hand for GenCon (the biggest event we do each year), and it's at the beginning of August, so come hell or high water, that book will be done...
When you were a kid did you feel a push or a pull away from science and engineering?

Paige: I always loved science. My mom always had me watching shows like Mr. Wizard, Nova, Star Trek, and any other sci-fi we could watch. In sci-fi, particularly, there seemed to be equity in that there were women scientists and engineers (at the time I didn't know what an engineer was), but for me it was like duh that's what I'm going to do. I didn't really know the real world stats on women in STEM at the time. 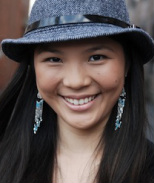 Mary: I loved science as a kid and pursued it throughout high school. In fact, when I entered college, the first major I declared was chemical engineering. Sadly, I dropped out of the engineering school after a year. In hindsight, I think it was the way the intro courses were structured. Giant, soulless lectures where you had people of all levels, from total newbies to folks who'd taken the course before but wanted an easy A, in one spot. Problem sets that were graded solely on the answer, not any of the work leading up to it, that gave you no room to learn from your mistakes. Basically, I was left feeling that unless all this came to you easily and naturally, you were a loser who had no place STEM. But the thing is, STEM *is* hard. And it's okay to struggle along the way. I wish I'd realized that as a teenager. And I wish my school had actually cared about nurturing potential talent, instead of creating a Hunger Games-type environment that left people to fend for themselves.

Did any specific authors influence you growing up?

Paige: I think my favorite authors I read as a teen were Terry Brooks and Dean Koontz. Sometimes I think I'm more influenced by movies and TV.

Mary: I loved the Sherlock Holmes books and stories as a kid. The first time I read them, I'd checked out the complete omnibus of all the collected works, so to me, "Sherlock Holmes" is one giant book haha. I think it's why all my books have some element of mystery to them.

Were there specific stories or characters that you related to?

Paige: Going down the movies and TV path .... Agent Scully was one of my favorites on TV. When I got way older (like married with a kid) Kaylie from Firefly.

Mary: Hmm I don't think I actually related to any characters when growing up. It always felt like an "outside looking in" situation. Maybe it's because of the types of things I chose to read -- old-school "literary" fiction by old or dead white guys. To be frank, the first character I truly related to was the main character of a YA book that came out in 2018 -- Mei from Gloria Chao's American Panda.

You write in other genres as well. What are some of your other books? 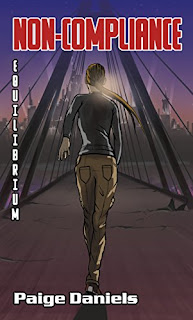 Paige: I'm mostly a science fiction girl. I have one series published and a few novellas and novels lying around I'm still trying to figure out what to do with. My published series is Non Compliance. 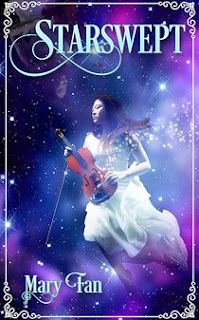 Mary: My first published series was a space adventure trilogy: The Jane Colt trilogy. It's in the same genre realm as BRAVE NEW GIRLS because it's still sci-fi, but it's not specifically for young readers. I also have a YA dark fantasy series. The first book in the planned trilogy, FLYNN NIGHTSIDER AND THE EDGE OF EVIL, came out in 2018, and there are a few short stories that take place in the same universe (I'm planning to collect them as an anthology). This has no science at all -- it's all dark magic, bloodthirsty monsters, and evil spirits... plus a totalitarian government that uses magic to oppress people. Another book of mine is STRONGER THAN A BRONZE DRAGON, which is a steampunk fantasy that takes place in an East Asian-inspired second world. Warrior girl who teams up with a mischievous thief to defeat the demon king... oh, and there are mechanical dragons and airships.

Paige: Interesting... I think with the POD and e-readers it really has opened the field to have a lot more diverse stories. I think that's a great thing. However, with all good things there's a downside. As reader, it's really easy to get overwhelmed at all the selections there are now. I think at that people tend to shut down and just not choose anything, because they get overwhelmed. But with streaming services (Netflix, Hulu) I really think there's going to be more of chance to get a new set of stories told. It's just if the people with the money want to take a chance on the new stories instead of the same old things we've been seeing for years.

Mary: There's a huge push for diversity in children's literature, and it's having tangible results. Books by non-white authors, LGBTQ+ authors, disabled authors, and more are finally getting published and promoted in significant numbers. Which is amazing, since those authors represent and often depict a whole range of experiences that were left out of books for so long. There's still a gap to be filled, but thankfully, it's narrowing.

Check out the links below to buy the books!

Brave New Girls: Stories of Girls Who Science And Scheme